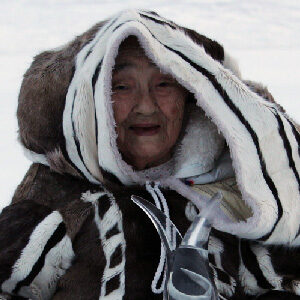 Qapik Attagutsiak’s early beginning in midwifery at the age of ten was the catalyst in developing a deep, rich body of traditional knowledge.  Considered a master seamstress, Qapik has gifted many Inuit with her intricate traditional hunting clothes.  Her lifetime has been spent living traditionally: raising dog teams, assisting with camp life, practicing midwifery and child rearing.  (She has delivered hundreds of babies since that beginning.)  She was recently honoured by Parks Canada and the Canadian Armed Forces as a “Hometown Hero,” the only known surviving representative of the wartime efforts by Inuit communities during World War II.  Qapik’s dedication to midwifery and mental wellness support was recently acknowledged by the Government of Nunavut and Inuit Tapiriit Kanatami, who have documented and recorded her experiences.  She was also instrumental in developing the Akausivik Inuit Family Health Team and Medical Centre in Ottawa, ON.  Now, at 100 years old – or young! – Qapik’s lifework has embodied both Inuit Qaujimajatuqangit and Inuit societal values.  Her longevity and her legacy represent a shining example for young Inuit to follow.