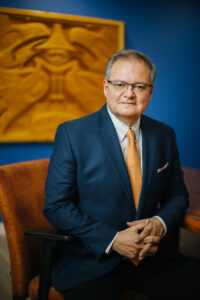 An Ojibway from the Animakee Wa Zhing 37 First Nation, Mike DeGagné comes to Indspire with a lifetime of work in Indigenous health and education.  He was appointed Nipissing University President and Vice Chancellor in 2013, becoming one of the first Indigenous presidents of a Canadian public university. While President of Nipissing, Dr. DeGagné dedicated much of his work to Indigenous issues and ensuring that Nipissing University took a leading role in the Indigenization of the post-secondary education sector. During his tenure, the University experienced growth in both its graduate and undergraduate programs as well as an increase in research funding.  Nipissing also strengthened its position as one of the top universities in the country for student experience, mental health services, residence experience and overall student satisfaction.

He later served as the first President of Yukon University, a new hybrid post-secondary institution in Whitehorse, Yukon. During this time, he managed the transition to a university. His career includes working with the federal government in management of Indigenous programs and as a negotiator of comprehensive land claims. In 1998, Dr. DeGagné became the founding Executive Director of the Aboriginal Healing Foundation, a national Indigenous organization dedicated to addressing the legacy of Canada’s Indian Residential School System. He is the Chair of The Federation for the Humanities and Social Sciences.

Dr. DeGagné holds a PhD from Michigan State University, focussing on Indigenous post-secondary success, and Masters degrees in Administration, Law, and Public Ethics. Since 2001, Dr. DeGagné has given numerous presentations across Canada on issues of Indigenous health, residential schools, law, reconciliation, and governance. Internationally, he has brought the same message to the United States, Australia and New Zealand. He has co-edited and co-authored a number of publications in Canada and Australia on reconciliation and healing.

He has served on numerous boards of directors in the health and university sectors including as Chairman of Ottawa’s Queensway Carleton Hospital and Chairman of the Child Welfare League of Canada. Dr. DeGagné is a recipient of the Order of Canada and the Order of Ontario as well as the Queen’s Diamond Jubilee Medal. Most recently, he received an Indspire Award for Public Service, was inducted into the Nipissing District Human Rights Hall of Fame, and received an Honorary Doctorate of Law from Dalhousie University.

To request Mike to speak at your upcoming event, please contact us at speaking@indspire.ca.