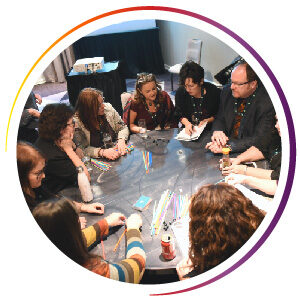 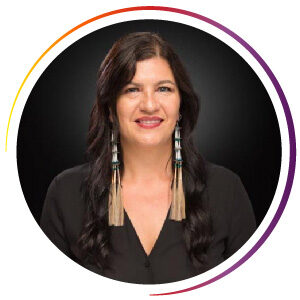 Lori is 2-Spirit and is a member of Montreal Lake First Nation, Treaty 6 territory. She is an intergenerational survivor of the Indian Residential School system and a child from the Sixties Scoop generation. Lori has made it her career advocating for social justice and working towards a more equitable society for all. With over 13 years of progressive leadership in student services, academics, research and administration, Lori is an experienced leader in education. Through the sharing of her lived experiences, traditional knowledge, and professional proficiencies she provides uncomfortable truths required for advancing processes of decolonization, Indigenization, and reconciliation within organizations and communities. Lori holds two undergraduate degrees (Indigenous Studies and Psychology), a master’s degree in Adult Education and is a PhD candidate in Social Justice Education. She currently holds the position of Associate Vice-President, Indigenous Engagement at the University of Regina. 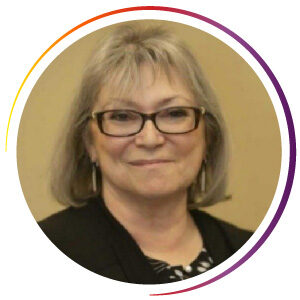 Dr. Catherine L. Cook, MD, MSc, CCFP, FCFP is Métis and grew up in northern Manitoba. She received her undergraduate and postgraduate medical education at the University of Manitoba (MD/87, MSc/03) and has been employed by the university since 1987. She most recently served as the head of Ongomiizwin – Indigenous Institute of Health and Healing and Vice-Dean, Indigenous Health, Rady Faculty of Health Sciences. She was also the Provincial Lead, Indigenous Health at Shared Health until taking on the role of Vice-President (Indigenous) full-time in April 2020.

Dr. Cook has focused on Indigenous health as a priority in her career. She practiced as a family physician in remote northern nursing stations for several years before focusing on public health practice, and more recently health administration and management. She has taken a leadership and operational role in the development and implementation of Indigenous health programs and services that focus on addressing the gaps and barriers to equitable access of quality health care for Indigenous people in Manitoba. At the university, Dr. Cook took a leadership role in the creation of Ongomiizwin – the Indigenous Institute of Health and Healing in the Rady Faculty of Health Sciences, officially approved by Senate in 2017. 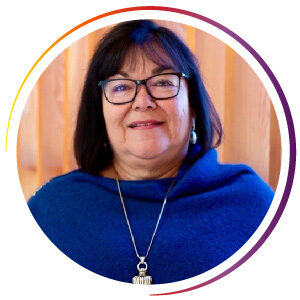 Dr. Cote-Meek is Anishinaabe from the Teme-Augama Anishnabai. She is the inaugural Vice-President Equity, People and Culture at York University where she leads a team that includes the Centre for Human Rights, Equity and Inclusion, Labour Relations and Human Resources. Prior to this, Dr. Cote-Meek was the Associate Vice-President, Academic and Indigenous Programs at Laurentian University where she played a leadership role in advancing Indigenous education. Author of Colonized Classrooms – Racism, Trauma and Resistance in Post-Secondary Education (2014) and two recent co-edited books, Decolonizing and Indigenizing Education in Canada (2020) and Critical Reflections and Politics on Advancing Women in the Academy (2020), Dr. Cote-Meek is well-known provincially and nationally for her work in promoting equity and inclusion in higher education. 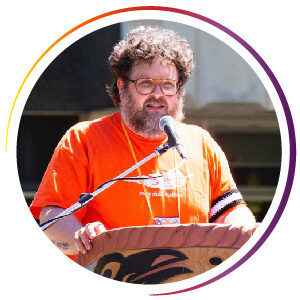 Dr. Rob Hancock (he/him/his) is Cree-Metis from Treaty 8 territory on his mother’s side, and English Canadian on his father’s. He was born and raised and is grateful to live and work in lək̓ʷəŋən territory. Trained as an anthropologist and historian, he holds a Ph.D. in Interdisciplinary Studies from the University of Victoria, where he is currently the Associate Director Academic in the Office of Indigenous Academic and Community Engagement and an Assistant Professor in the Department of Anthropology. For the past decade he has held a series of roles in Indigenous student affairs, where he has co-taught undergraduate and graduate seminars on Indigenous research and community engagement methods, coordinated experiential learning placements, and worked across the institution on projects, initiatives and processes to support Indigenous student success.

Building on this work, he has contributed to the development of resources for Indigenous student affairs, including the BCcampus Indigenization guide for frontline staff, student services and advisors (with Ian Cull, Stephanie McKeown, Michelle Pidgeon and Adrienne Vedan) and the new CAS Standard for Indigenous student affairs (with Cori Bazemore-James, Meg Evans, Saundra Mitrovich, Symphony Oxendine, Jack Soto and Stephanie Waterman). He has offered keynotes, presentations and workshops based on this work at conferences such as World Indigenous People’s Conference on Education and ACPA—College Student Educators International, at institutions including UVic, the University of British Columbia and Douglas College, and for groups including the BC Council of Senior Student Affairs Leaders and the Western Canadian Senior Student Affairs Administrators. 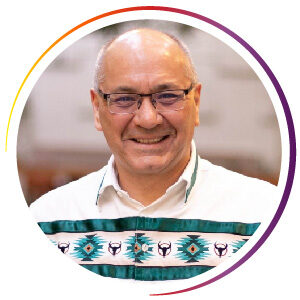 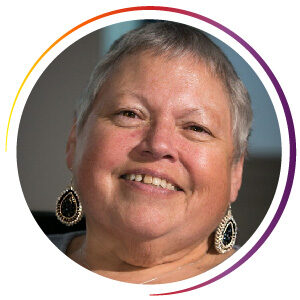 Kanonhsyonne (Jan) leads the Office of Indigenous Initiatives, providing strategic support and leadership university-wide to oversee the implementation from the Queen’s TRC Task Force Report recommendations. Jan is Turtle Clan, a Clan Mother of the Mohawk Nation from Tyendinaga Mohawk Territory. She began her academic career as an adjunct faculty member in the Faculty of Education and went on to help establish the Aboriginal Teacher Education Program, serving as Academic Co-Director for the program in 1997-98. Jan is in the process of completing her Master of Arts in Gender Studies at Queen’s. Jan served as Director of the Four Directions Indigenous Student Centre for 7 years prior to being appointed as the Director of Indigenous Initiatives and most recently the Associate Vice-Principal (Indigenous Initiatives and Reconciliation). 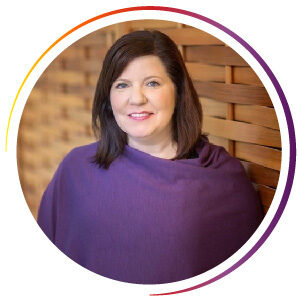 Sheryl Lightfoot is Anishinaabe, a citizen of the Lake Superior Band of Ojibwe. She is the North American Representative to the United Nations Expert Mechanism on the Rights of Indigenous Peoples, Canada Research Chair in Global Indigenous Rights and Politics and Associate Professor in Political Science, the School of Public Policy and Global Affairs and Indigenous Studies. She is also Senior Advisor to the President on Indigenous Affairs and is leading the implementation of the 2020 Indigenous Strategic Plan across UBC.

As one of the world’s experts in global Indigenous politics, Sheryl’s research specializes in complex questions of Indigenous peoples’ rights and how those rights are being claimed and negotiated. She holds a PhD in Political Science from the University of Minnesota as well as a master’s degree from the Humphrey Institute of Public Affairs, University of Minnesota. Prior to her academic career, she had fifteen years’ volunteer and contract experience with a number of American Indian tribes and community-based organizations in the Minneapolis-St. Paul area, including nine years as Chair of the Board of the American Indian Policy Center, a research and advocacy group. As a member of the UN Expert Mechanism Sheryl provides the Human Rights Council with expertise and advice on the rights of Indigenous Peoples. The Mechanism also assists Member States in achieving the goals of the United Nations Declaration on the Rights of Indigenous Peoples. She is the first Indigenous woman from Canada to be appointed to this prestigious position. 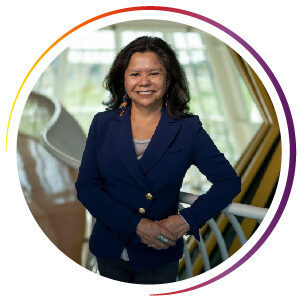 Dr. Jacqueline Ottmann is Anishinaabe (Saulteaux) from Fishing Lake First Nation in Saskatchewan. As of September 7th, 2021, Jacqueline became President of First Nations University of Canada. After spending 13 years at the University of Calgary where she held various scholarly and leadership responsibilities including Director of Indigenous Initiatives and Co-Chair of the Indigenous Strategy, she became the inaugural Vice-Provost Indigenous Engagement at the University of Saskatchewan and Professor. Ottmann is also the first Indigenous person to become President of the Canadian Study for the Society of Education. Jacqueline’s research interests include leadership, change management, organizational theories and practices, and strategic development. Ottmann has been recognized as an international researcher, advocate, and change-maker whose purpose is to transform practices inclusive of Indigenous leadership, methodologies and pedagogies. Jacqueline is driven to create schools, organizations, and communities that foster a deeper sense of belonging and appreciation for Indigenous peoples – histories, stories, philosophies, knowledges, intellect, traditions, and lived experiences. 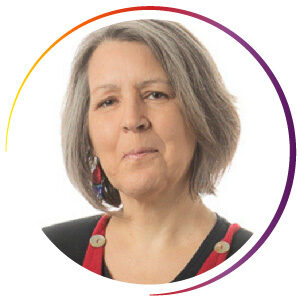 Manon Tremblay is a member of the Muskeg Lake Cree Nation.  She is the Senior Director, Indigenous Directions at Concordia University where she oversees the implementation of the Indigenous Directions Action Plan.  Prior to her appointment at Concordia, Manon was the Director, Indigenous Research at the Social Sciences and Humanities Research Council of Canada where she led the initiative to build Indigenous research capacity.  Prior to that, she was the Senior Project Leader for the Public Service Commission of Canada’s Aboriginal Centre of Expertise where she worked in strategic Indigenous talent management programs and services. Manon has spent 20 years of her career as a university student services administrator, part-time faculty and senior advisor on Indigenous affairs, first at Concordia University and then at the University of Ottawa.  Manon has dedicated her entire career to the advancement of Indigenous Peoples. 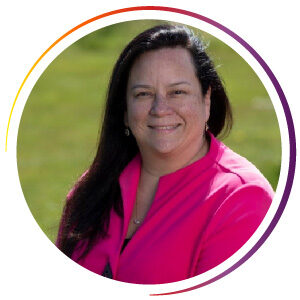 Kory Wilson (Kwakwaka’wakw), BSc. JD, is the Executive Director of Indigenous Initiatives and Partnerships for British Columbia Institute of Technology. She is Chair of the World Federation of Colleges and Polytechnics Indigenous Affinity Group. Kory has over 20 years of experience in post-secondary education, community development, and legal profession. She serves on many boards from Pearson College, BC Women’s Foundation, Downie Wenjack Fund, Future Skills Canada, to the BC First Nations Justice Council. A sought-after speaker and strategist on advancing ‘truth-telling’ about the past and moving forward towards Reconciliation. With a deep commitment to education, both formal and informal, she knows innovative and creative solutions are a must to move Reconciliation into ReconciliACTION. Education and access to knowledge are key to move everyone forward. When people know better, they do better.

📣 Calling all amazing #Indigenous educators: we