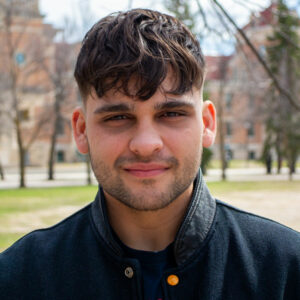 “You have to know where you come from, before you move forward…it is our job as Métis people to make sure that those children grow up with that culture and language inside their hearts; so that they can pass it along to their children and grandchildren, like our parents have done to us.”

Justin Langan has been fostering pride in the Métis community since he was an eleven-year-old working at the local Friendship Centre. He currently leads numerous initiatives to heighten the political and community engagement of Métis youth, including working with the Northwest Métis Council to produce an interview series with Métis Elders. He serves as Editor-in-Chief of The Cart, the Manitoba Métis youth newsletter and works to establish youth representatives of Métis Local Councils provincially. He is also helping to design a Métis Youth Website to promote connection with Métis culture and language. Justin has used his interactive media arts skills to complete a practicum with CBC Manitoba – and to produce and direct a short documentary about an Indigenous mother whose son battled addiction. Justin’s genuine and sustained commitment to fostering an inclusive community demonstrates his resilience, strength, and dedication.