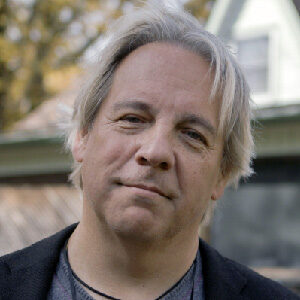 Award-winning playwright, journalist, filmmaker and author Drew Hayden Taylor has travelled around the world and written about it from an Indigenous perspective, bridging cultural gaps with humour, finesse, wisdom, and craftsmanship. He has won multiple awards for his wide body of work, including the Dora Mavor Moore Award and the Floyd S. Chalmers Award, and his creations have been translated for international audiences.  Informed by Ojibwe philosophy, Drew’s acclaimed work deals with the complexities of navigating Indigenous identities in the face of colonialism; he has proudly served as writer-in-residence or playwright-in-residence in multiple venues across Canada, Europe, and the United States. He’s worked on seventeen documentaries exploring Indigenous experiences, and he’s also served as a scriptwriter on many acclaimed series, including North of Sixty and The Beachcombers.  His latest novel, Chasing Painted Horses, brings his total number of published works to thirty-three – and he has also just begun hosting Going Native, a TV series which explores a different and unique aspect of Indigenous identity in each episode.